First parish created in Porzay, in the High Middle Ages, it was, for many years, the religious center of the "country" as a whole. Subsequently, the parish was dismembered in favor of Ploéven who gave birth, in turn, to Plo-Nevez (the new parish). History and legends mingle here, with the familiar characters of the City of YS: King Marc'h, Saint Corentin, King Gradlon, ... 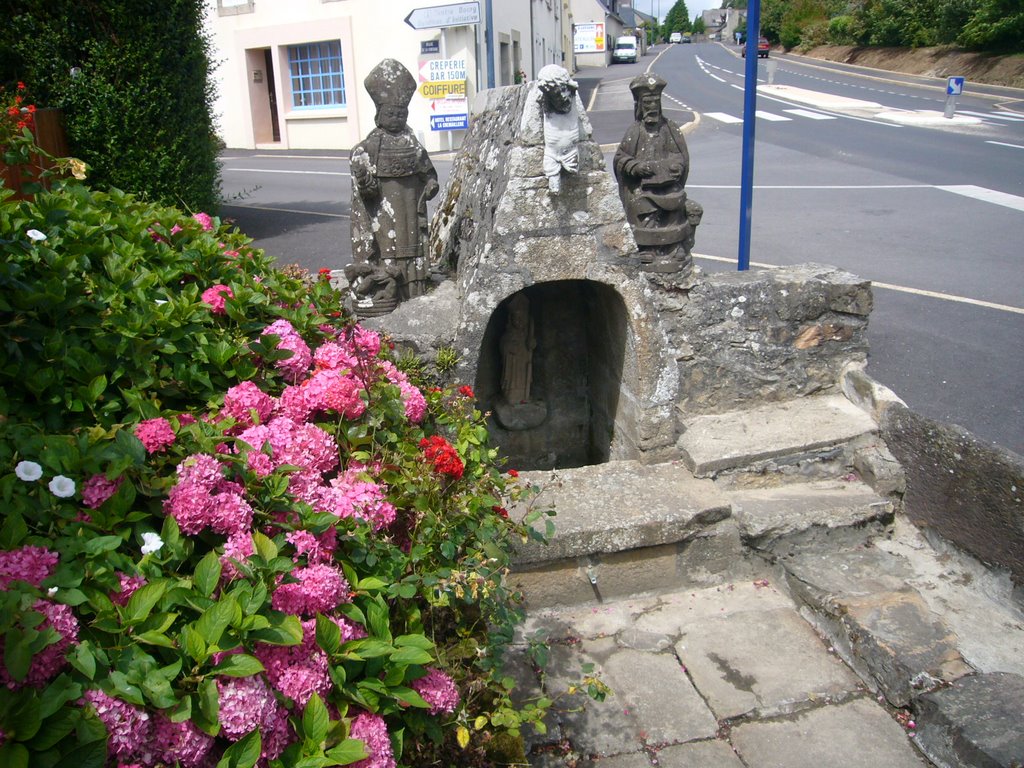 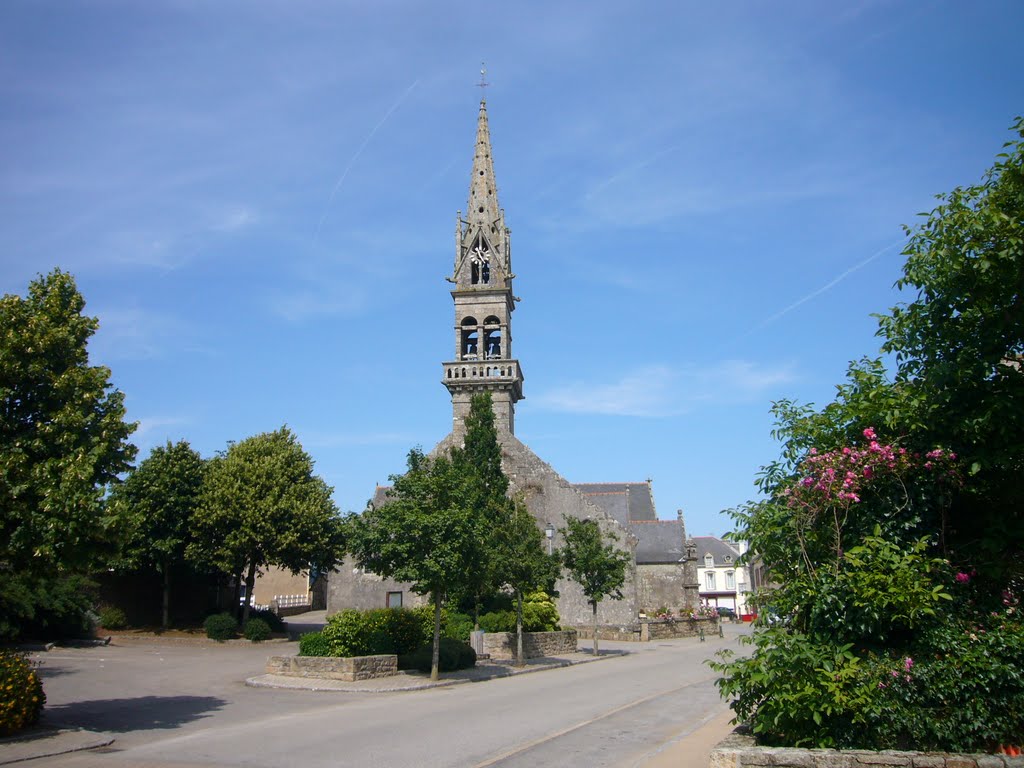   The church of Plomodiern Saint-Mahouarn (XVI-XVIIth century), rebuilt between 1858 and 1864. The building includes a nave of six bays with aisles, a transept and a choir with polygonal chevet. Partly dating back to the 16th century, the current building was almost entirely rebuilt in 1858, with the exception of the choir and the south side porch. Above the northern arcades of the nave are the dates of 1574 and 1597. The tower, with three galleries and eight octagonal domes superimposed, is more recent than the rest of the church: begun in 1663, it is completed that in 1772. The choir dates from the 17th century.

The chevet and the south side porch date from 1624. The exterior door of the south side porch is flanked by two fluted columns with Ionic capitals. At the foot of the statues of the apostles are inscriptions with the dates of 1621 and 1626. The pulpit to preach dates from the seventeenth century. The box with the holy oils dates from 1724. The church of Plomodiern has an authentic reliquary of Saint Corentin.

Inside the building, it is necessary to notice the sandpits of the central nave and its five dragons. The church houses the statues of St. Peter (seventeenth century), St. Nicholas, St. Corentin (seventeenth century), Our Lady of the Rosary, St. Dominic, St. Catherine of Siena and St. Herbot; The porch, which deserves special attention, has 10 niches with shell enclosing the statues of the apostles.

Forgiveness is celebrated on the 3rd Sunday of September. 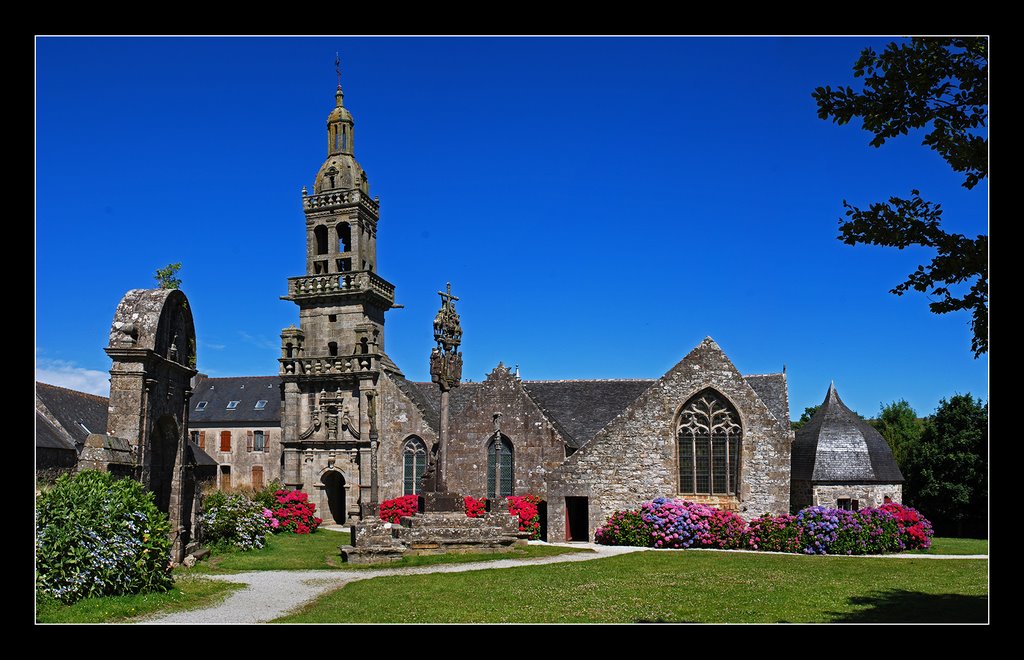 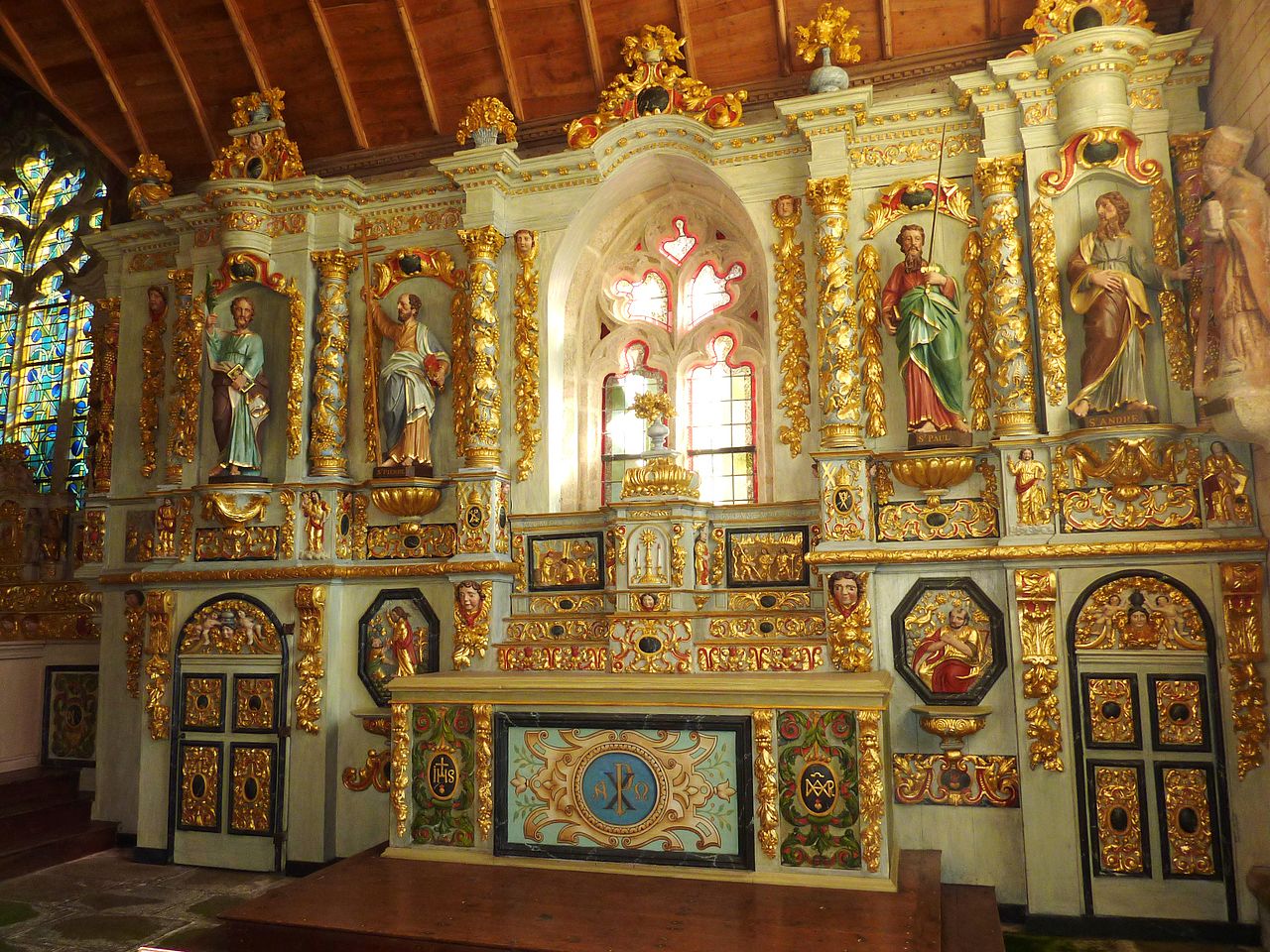  The chapel of Saint Mary of Menez Hom is a pure jewel set in the middle of the austere moors that line the southern flank of Menez-Hom. We enter the enclosure by a triumphal arch. The calvary with three barrels dates from 1544 while the steeple, a marvel, was started in 1663. The interior of the chapel (1570) is also remarkable with one of the most beautiful altarpiece of Cornwall.

A big fair was held on June 17, the day of St Hervé, the traders of Faou, Brest, Douarnenez, Quimper and Morbihan.

This place is the crossing of old high traffic roads. The resources from this fair explain the architectural richness of the chapel.

Nearby, a monument commemorates the activity of the Finisterian resistance. Forgiveness is celebrated on the 2nd Sunday of May. the Sainte-Marie chapel of Menez-Hom (16th century), modified in the 17th and 18th centuries. The original building, cross-Latin choir little salient, dating back to the first half of the sixteenth century as indicated by the inscriptions of the nave "I. Mauguen Fab. Lan 1574 "and" Au. Moreau Fab. Lan 1597 ", as well as those of the west gable and the north facade" Guillaume D. Hervé. F.-P. Polesec Fa Lan 1573-H. Ho Moreau F. in Lan 1570 "and" H. Olier Fa in Lan 1572 ". This building was enlarged between 1570 and 1591: doubling of the aisle, creation in the north-west corner of the "chamber of the monks".

The church was modified in the 17th and 18th centuries. The current building is of irregular tau-shaped plan comprising a nave with a span without aisle and tower to the south, then two spans with south aisle and double north aisles, a span with double aisles and finally a vast choir with a straight edge that is not overflowing.

On the south gable is the inscription "Missire M. Cravec Rector of Plomodiern, Guil Le Doaré Priest Vicar C. Roignant. F. 1766 ". The altarpieces, by Jean Le Seven (carpenter) and Jean Cevaer (sculptor), date from 1703 and 1710. The three altars of the apse are surmounted by altarpieces and niches with twisted columns. At the high altar (1703) are the statues of the Holy Family: St. Mary of Menez-Hom (1715) carrying the Child Jesus, St. Joseph, St. Anne and St. Joachim. The high altar bears the inscription "V. E. Di. My. Ol. Bourdoulous. R. Noel Moros F. 1703-M L. Guillermou Curé 1710 ".

A bell dates from 1810 and bears the inscription "Mr. Lebeurriet did me". Modern stained glass is the work of J. L. Nicolas, father and son, Morlaix 1872, and Hubert de Sainte-Marie, 1957. In the mistress glass are represented: St. Anne, the Virgin Mother, St. Joseph and St. Corentin. 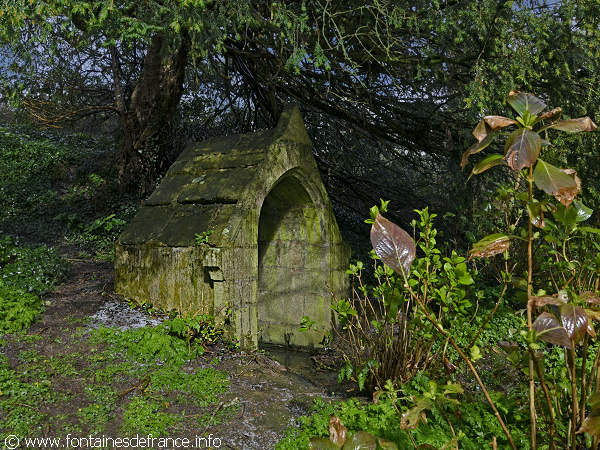 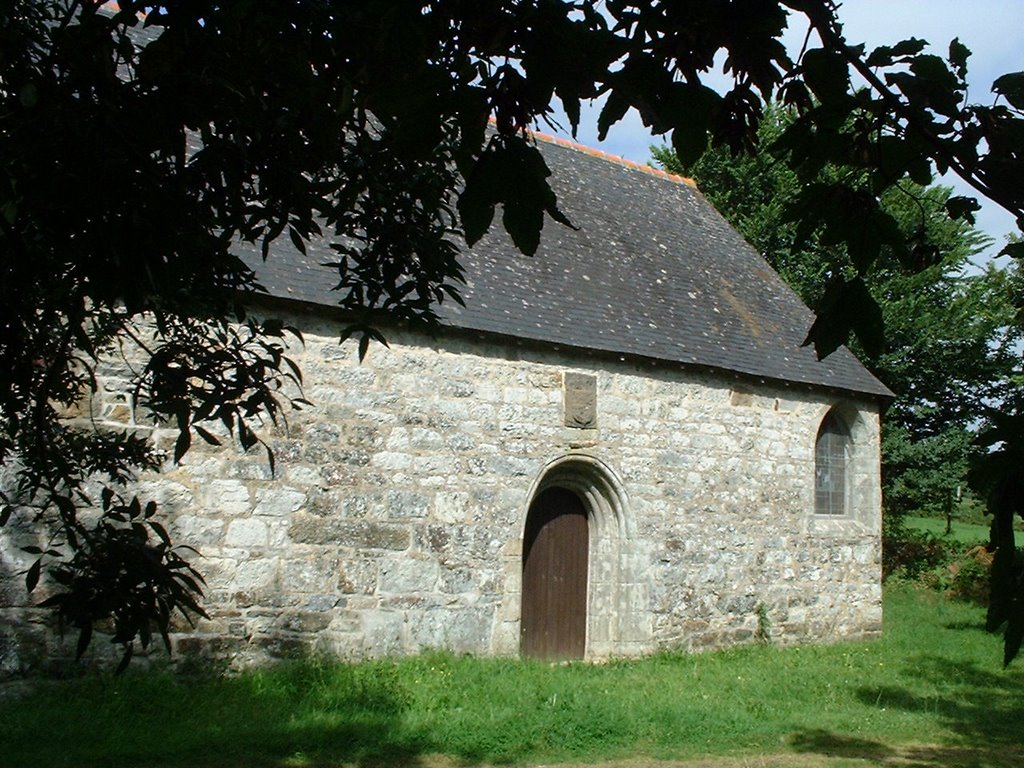  The San Sebastian chapel (XVI-XVIII century). San Sebastian (officer of the Roman army, martyr of the end of the third century) was invoked against the plague. It is a rectangular building with wing chapel to the south. It bears the inscription "Ives Tretout Fa. In Lan 1573". The chapel houses a statue of Christ with a child on each knee and the statues of Saint Sebastian, Saint Margaret, Saint Roch, Saint Abbot and a holy bishop 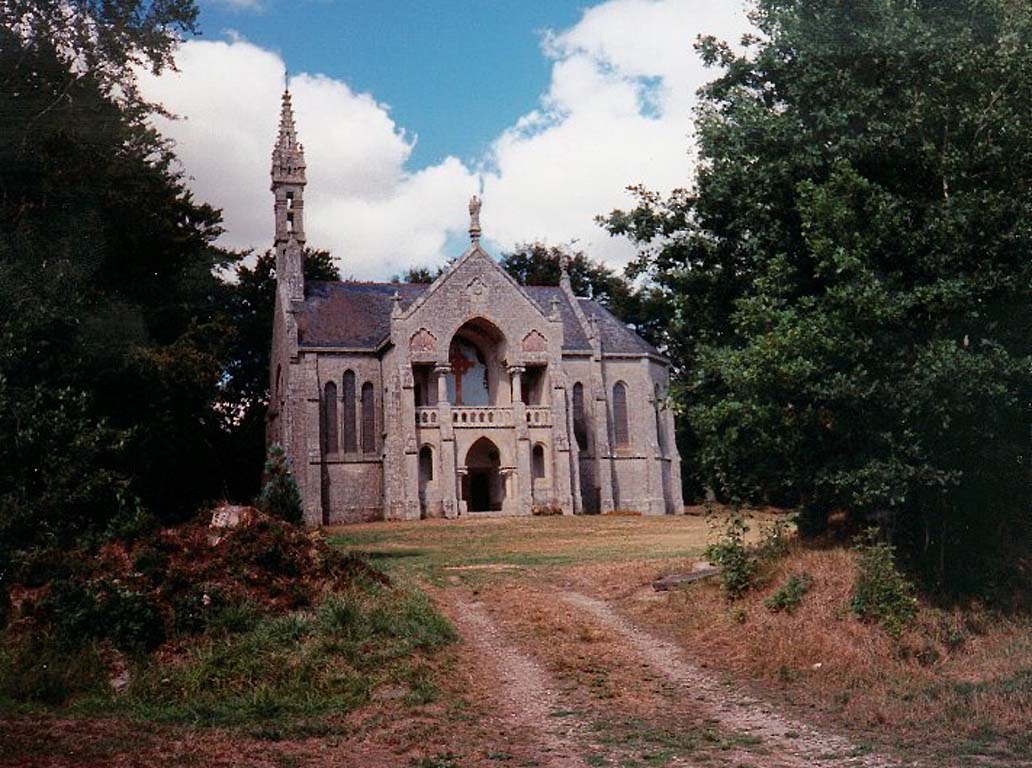  Saint-Corentin chapel (1900). The primitive chapel dates from the 15th century and was rebuilt from 1898 to 1900 on the plans of Canon Abgrall. The nave is flanked south of an outdoor loggia. Above the main altar, there is a statue of Saint Corentin dating from the old chapel. The translation of the relic of Saint Corentin and the statue to the chapel took place on July 23, 1893; The chapel St Corentin celebrates the worship of this saint who, born in 375, was the first bishop of Cornwall Quimper.

In the fountain of his hermitage was a miraculous fish that was recovering although the hermit took a piece of it every day. One day hunting, Gradlon met Corentin who feeds him fish, he and his suite. Amazed, Gradlon offered to Corentin the bishopric of Quimper. Forgiveness is celebrated on the third Sunday of July. 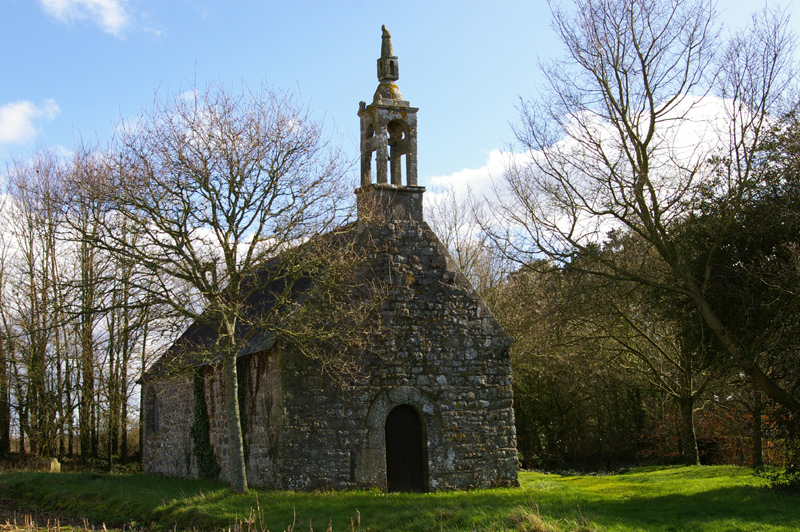  The small chapel Saint-Sulliau or Suliau (XVIIth century). It is a rectangular building of the seventeenth century. We can see the coat of arms of the Abbots of Landévennec dating back to 1665. The altarpiece dates from the 17th century. The chapel houses the statues of Saint Suliau, Saint Barbara, Saint Mathurin, the Virgin Mother and Our Lady of Graces.
​​​​​​​

T of the seven original chapels, three of them have now completely disappeared: the Saint-Gilles chapel (destroyed in the 19th century and once located in the village of Saint-Gilli), Saint-Mabrit chapel or Saint-Mibrit (already in ruins in 1823 and located formerly in Lomibrit) and the chapel Saint-Yves (destroyed in the XIXth century and located formerly on the site of the current cemetery) 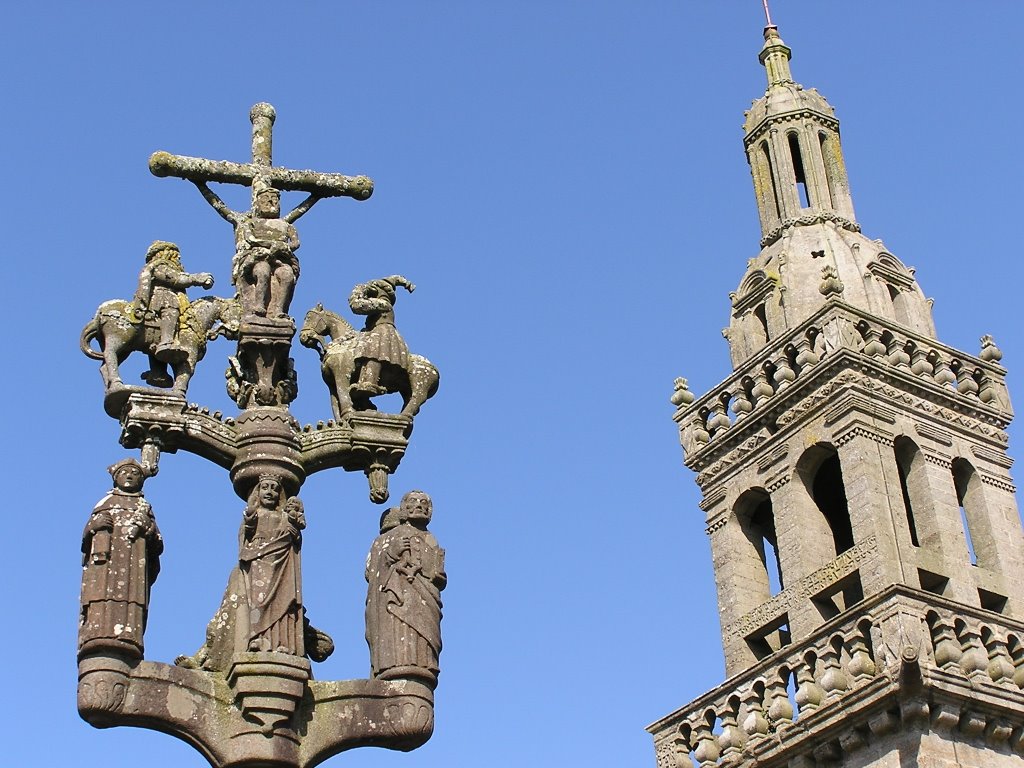  Calvary with three crosses (1544), located on the placard of the chapel of St. Mary of Menez-Hom. This calvary comes from the workshops of L'Elorn. It bears the inscription "Jehan The Faloder Fabric Feist Iceste Cross Making MVCXLIIII (1544)"

 the triumphal arch (1739 or 1759), from the placere of the chapel of St. Mary of Menez-Hom. It consists of two lateral arches and a central door surmounted by a pediment where is dug a niche carrying a statue of the Blessed Virgin. It bears the inscription "Hervé Lastennet Fabricque 1759"

  the fountain of Saint-Corentin chapel. It is covered with a curved vault. Legend has it that it once housed a rather exceptional fish

 Saint Sebastian fountain. She feeds a wash house and carries the four Lys of France of Tréanna de Lanvilliau and the cross of Saint André

This marsh with an area of 14 hectares has become the property of the General Council of Finistère for a few years only. The purpose of the management measures is to contain the peaks of nitrate input from the entire Kerharo River watershed during heavy spring and summer rains. This place has been chosen as a demonstrative slope with a goal of "fight against green algae" by the Brittany region as part of the water policy.